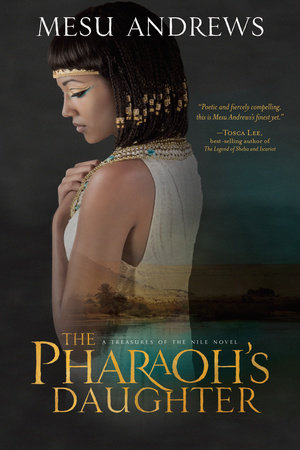 ISBN 13: 978-1601425997
Genre: Fiction, Biblical Fiction
I was completely blown away by this novel. Mesu Andrews has a talent for writing biblical historical books.
It’s refreshing to know that there are some good Christian novels out there that are worth reading. It’s fascinating, engaging, thrilling, and causes one to stop and think. Mesu Andrews also knows how to tie in the Word of God without it being so overwhelming or preachy. We all live in fear of something, whether it’s death or childbearing like Anippe or something else. It’ll definitely change your perspective.

Ancient Egyptians believe that their Pharaoh is a god. Anippe has always lived in shadows, fearing for her life. She is the sister of King Tut and daughter of Horemheb. What happens when she becomes the bride of Sebak, a kind of quick-tempered Captain of Pharaoh who expects an heir? In order to protect herself from the underworld gods and to produce an heir, she concocts a series of deceptions, including some that involved the Hebrew midwives. These midwives were ordered by King Tut to drown all Hebrew sons in the Nile River.

While bathing in the river one day, Anippe believes that Egypt’s gods have smiled on her when she discovers a floating basket in the River. This only causes more deception herself and her son, Mehy, in mortal danger.

Ancient Egypt was a time of bloodshed and savage politics where the gods reveal their true and scary natures. Anippe wonders if her son will one day be king and if he will turn into one of them. Or does the god of her Hebrew servants, the one they call El Shaddai, have a different plan—for them all?

There is nothing negative I have to say about the book, other than that I don’t believe that King Tut is the Pharaoh that ordered all the Hebrew sons to be killed. It doesn’t quite fit in the timeline. However, only God knows who the real people were and how it influences us today. It works in the story and it makes it all the more interesting.

Disclaimer: I received a copy of this book from the publisher for my honest review, which I have given. I was not required to write a positive review and have not been compensated for it in any way. All opinions expressed are my own.

You can purchase a copy by clicking here.

Mesu Andrews’ deep understanding of and love for God’s Word brings the biblical
world alive for her readers. Her first novel, Love Amid the Ashes won the
2012 ECPA Book of the Year for a Debut Author. Her three subsequent novels, Love’s
Sacred Song, Love in a Broken Vessel, and In the Shadow of Jezebel all released to
great reader enthusiasm. Mesu lives in the Pacific Northwest with her husband Roy. You can find her testimony on her website if you’re interested in reading more.

One thought on “The Pharaoh’s Daughter by Mesu Andrews”

This site uses Akismet to reduce spam. Learn how your comment data is processed.

Follow It's Story Time With Van Daniker! on WordPress.com